Zero Waste: What is it and how do we start a zero-waste lifestyle?

Microplastics are plastic particles that are smaller than 5mm, or not bigger than a sesame seed. Due to their size, they can easily be overlooked, but they have unknowingly made their way into almost our daily life. There are more studies needed to understand the consequences of microplastics on the environment. But what has been found might surprise us.

What are the sources of microplastics?

Microplastics can come from many sources. People around the world produce tons of plastic wastes every year. Due to the lack of awareness, government support, and recycling facilities in many countries, the plastic wastes often land in a loose environment; on the land, river, and oceans. The larger plastics debris break down or degrade into smaller and smaller pieces.

Those tiny bits are what we call microplastics.

There are a lot of daily products that we don’t know contain microplastics. Another source is polyethylene plastics that are manufactured to be less than 5mm, which are commonly known as microbeads. This type of microplastics is what we found in health and beauty products, most are advertised as exfoliant products and in toothpaste.

In addition, synthetic clothing made from polyester and acrylics fibers is also a major source of microplastics. These materials are used to make clothing more durable at a cheaper price. However, what are the price we pay as consequence?

Every time we use a cleanser containing microbeads, their tiny particles can easily get washed into the water system, and eventually, end up in the ocean. When we wash synthetic cloths, the fabric will release fibers. Scientists have found that 85% of microplastic in our oceans is caused by the fibers from our clothes.

Why should we be worried about microplastics?

The problem with microplastics is that because they are so small that they can easily mingle with ocean life and end up in the food chain,  and entire ecosystems. 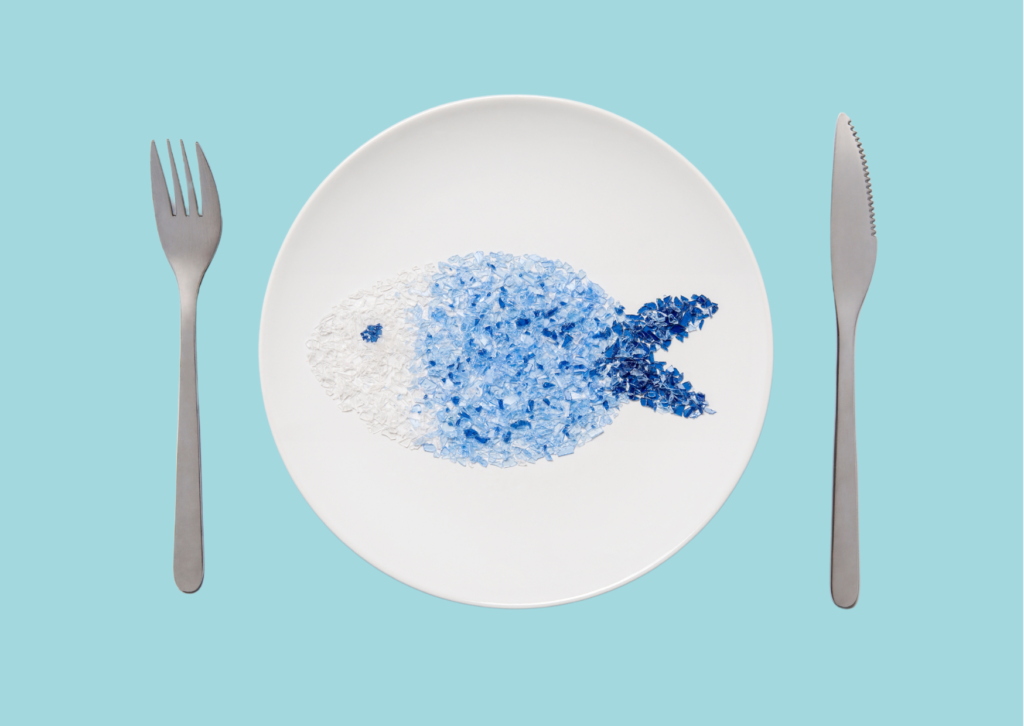 The marine wildlife can mistakenly think that they are food, or will accidentally ingest them while feeding. Sometimes the size can barely be seen with the naked eyes, and it is small enough to be eaten by plankton and can ultimately sink to the bottom of our oceans.  When the small fish on the lower food chain eat them, the larger fish feed on the small fish. As a result, fish on the higher food chain consume larger quantities of microplastics.

This microplastic can be harmful and toxic. It can damage the digestive system, reduce the quality of their nutritional intake, and make their guts being full of plastic rather than food

Besides our ocean, microplastics have been found in our food and drinks. A study has found that microplastics are found in 90% percent of table salt. Another study found that  83% of metropolitan tap water contained forms of plastic pollutants. Bottled water is also susceptible to the reach of plastics. The research on eleven of the world’s largest bottled water brands shows that 93% were tested for microplastics.

Although microplastics can enter the human body through ingestion, there has not yet been enough research on the direct long-term impact on human health. However, we know that plastic itself is toxic.

What we can do to avoid this problem?

Microplastics are everywhere. They have invaded the bottom of the ocean and some of the world’s remote places.

As individuals, we can start by applying the 4R: Reduce, Reuse, Recycle, and Replace to reduce the market for plastic consumption. Here is some example of what we can do:

Many people are still not aware of microplastics in our ocean. It is also extremely important to educate others on this issue so that they can make a better choice.

We have seen more governments have banned plastic use. However, in some places, the implementation is still weak.

Furthermore, composting and recycling facilities play a big role in fighting against the plastic pandemic. Unfortunately, there is a hiatus in this business in many places as they have not received enough support from the government. We hope that the government can take serious actions and we can be persistent to take care of our planet.

Make a solution, not pollution.